The following lecture was split into two parts: The work of Peter Zumthor [Architect] and the work of Wolfgang Laib [Artist].

Ritual: Noun A series of actions of types of behavior prescribed/action/activity/repetition.

Context: Laib and Zumthor have a particular synergy - the art and architecture comes together as a complete work. An exhibition of Laibs limited works took place at the the Kunsthaus bregenz [Designed by Zumthor] where all gallery spaces were reduced to their basic elements. Laibs working methodology has a connection to the mythology of material and connects to Jospeh beuys in his selection of working with particular materials that evoked perception and the senses.

The Architecture: Peter Zumthor [known for his "Thinking Architecture" book]. The facade becomes a lantern, all etched glass [not cut] - and is mirrored on all four sides. The outer skin is a secondary skin - natural light plays a significant role in how the building works. The skin is non-supportive and does not relate or impact on the construction. The glass is angled and provides a sloped tray in which natural light pours down into the internal spaces. All doors and stairs correspond to the simple minimalism and modernist grid replicated on each floor plate.

The internal spaces create an inner space with its secondary glass skin that is etched situated within a prefabricated concrete grid. this allows light to come through but with no view out. The fabric of the internal spaces remains that of the ideology of a gallery space, concrete floors [highly polished] and white walls. The introduction of glazed ceilings mirror the facades and shifts the light around the internal volumes. Each floor plate is supported by only three walls creating a large open plane in which artwork is situated within. 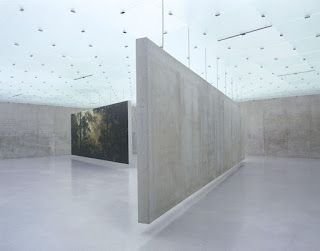 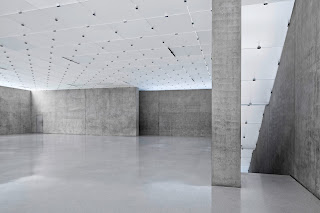 The Art: The exhibition was composed of a body of work with no more than 5-6 pieces. The show was an opportunity to showcase how the gallery has been designed and built with art in mind and want about celebrity architecture which is so apparent today. In the 1980s architects were not being considerate of the buildings inner function and that of the showcasing of artworks. This however was a piece of architecture that is rich in both appearance and function yet does not impact on the space where art is being exhibited. Just like the artwork of Laib the Kunthaus engaged with the process and material and was disengaged with the fashion and trends of surrounding architecture. 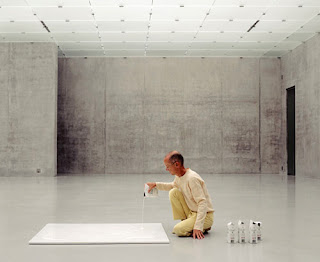 On the ground floor a bees wax sculpture becomes the almost supporting like foundation of the show, much in the way that architecture is built form the ground upwards. The process of hand craft was a significant characteristic of the show with the artwork shown in its most natural state. "Pollen from hazelnut" and two rice houses are examples of the relationship between art, architecture and founded by a process. The exhibition had a limited material palette and the work was of a highly considered scale with some work responding to the scale of architecture itself  and others of micro proportion compared to the sinner floor pace available [often due to the limitation in material collected]. This in itself creates a significant impact on and a relationship with the viewer. It is clear that Wolfgang Laib celebrates his practice of collecting material and the process of making as his ritual. His background in medicine and working in hospitals surrounded by death has become juxtaposed and flipped with his work streaming with the welcoming of birth and life.
Posted by Dan Fardell at 11:00