After sourcing my five spatial sequences we were placed into mixed critique groups to enable and start some form of dialogue about the relationship between our sources, our concern and to start defining 'words' that would initiate our research. There was a large emphases on attempting to identify words that would direct and narrow the type of research your would get form perhaps doing a "google search" or "library search". As I first group presentation having known each other for a few days there was still some confusion over the nature of the task and I have to realise how confident and natural presenting is to me having been a lecturer myself, however within our group of four we managed to have a conversation about each others interests, what our initial topic was [yet in many instance this wasn't defined] and was "in-part" able to feedback to one another.

I personally didn't receive much feedback [unsure why and it could have been a pitch, language or general lack of understanding]. I had already started to play about with words and create a semi-mind map that connected my sources [that I felt I could communicate clear connection and relevance to my overarching topic] and perhaps the group felt that there wasn't anything else to add? 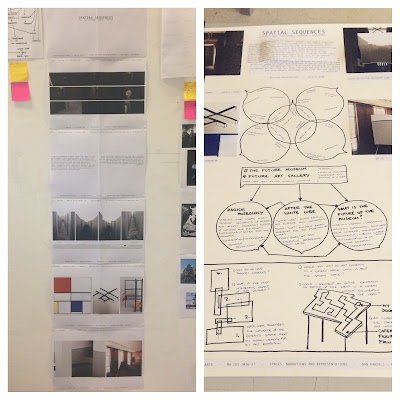 The next stage of this is to start developing a spatial sequence of my own that is somehow capable of communicating my research concerns [it is this word "concern" that I myself have a concern with] and to explore this through the juxtaposition of the following:

This will take me through to the end of Unit 01 where I should be able to have reflected on my body of work and supported my spatial sequential practice with a 300 word extract that will formulate part of my project proposal.  I suppose it is time to start thinking through making and go and see some gallery spaces.