Lecture discussing the work of Rem Koolhaas [OMA] and the context of the court and the pavilion. The lecture examined Koolhaus's "Kunsthal" [1992] and then related this back to the early work of modernism, De Stijl, and the work of Frank Lloyd Wright and Mies Van Der Rohe.

Koolhaas known for his punk attributes and notion into looking at contradictory forces and provocative architecture saw late modernism as being redundant, safe and not acknowledging a move forwards. The "Kunsthal" is a case study for the recognition of assemblage type architecture that used "off the shelf" products and materials that were both industrial by way of production and by way of process. The building has a combination of anti-detail and isn't obsessed over [something that was a key factor within traditional modernism]. The unresolved state of the architecture by way plays some part in giving this building a voice, creating a dialogue/statement between the way the building interacts with the landscape and the interaction between building and user. 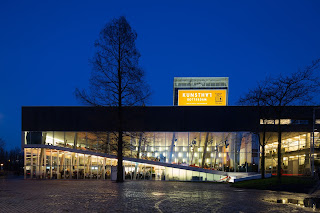 The orientation of the building acts on a slope or two slopes that move centrally through the building and up/down. This central passage sets up a series of cuts that makes the viewer uncomfortable [Something that Koolhaas was conscious of driving]. There is a complex disturbance within the navigation of the space, how you enter into the main [auditorium space] of the building instead of some smaller reception space. 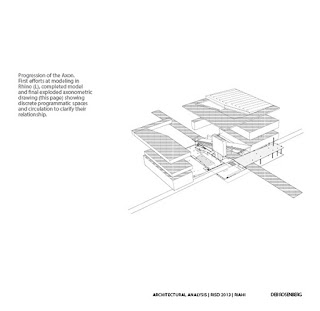 To fully comprehend/appreciate Rem Koolhaas's design decision for the "Kunsthal" one must acknowledge the drives of modernism:

Also understanding the history and precedents allows you to identify architectural details and make some form of acknowledge in the decisions undertaken. After discussing the following references [Below] you start to consider Koolhaas paying a semi "homage" to his predecessors. 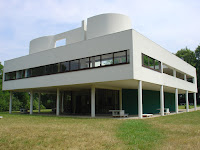 The above references create a conversation about space and showcase the existence of "the plane" as being a element that could extend beyond [This was also seen in the work of other De Stijl artists including mondrian/Van Dosburg]. The grid is also a clear reference that is acknowledged in both painting, furniture and architecture. Within the architectural references the extension of the plane creates this connection between interior and exterior and a dialogue of "The open". When you consider these references in relation to the"Kunsthal" there is a clear mapping and almost architectural collection that has gone on. As if Rem has taken these formulated and found architectonic elements and assembled them together [also capitalizing on the opportunity to question them, modify where possible and integrate them into a piece of architecture that moves forward]

Bringing this into the context of court and pavilion, each of the references including the "Kunsthal" have this commonality of pavilion based architecture [in particular Lloyd Wright and Van der rohe] where the pavilion is perhaps often set within the boundaries of a courtyard, here we see the court yard framed within the pavilion, where exterior architecture positions itself to relate to the external space and surrounding area.
Posted by Dan Fardell at 14:15