The space of paintings: The development of pictorial space


Byzantine: Figures occupy an anonymous space. the use of gold background [shown in dark reflecting spaces often lit by candle light in scared spaces]. The figures appear within an ambiguous space. The introduction of hatching is used to show garment folds and drapery. The paintings themselves hold an isometric projected view that were opposite to conventional standards of seeing. Styled representational figures towards the end of this period started to become more characterized showing personality.

Perspective and architecture used in painting started to give and promote different spaces. This was also supported and reflected by the characters painted and depicted a stronger presentation of the roles and narratives being communicated. The architecture started to play a significant role in understanding this 2Dimensional space.

Masaccio [1425] - Perspective and the painted frame is now introduced. the architecture now gives you levels of reality and non-reality. There is a shift in the co-existence of time realms being portrayed. paintings start to give the viewer two view points, those situated within the existing space and realm of the viewer and those beyond the unreachable. the viewer is shifted into the presence as if amongst the reality of those painted. 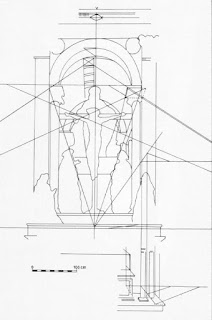 Bellini [1505] - the physical frame is replicated in the painting [through the architecture]. The figure are now painted at life scale to determine physical presence form the viewer.

Bellini [1513] - The painting is situated in a space by a window so that in one particular moment in time the real light mirrors up to the light project in the painting. Real time and space now has a greater connection to the ambiguity of the paining and the viewer can attempt to relate the the time of which the painting is depicting. 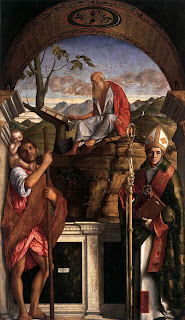 Titian [1519] - Paintings start to take the existing viewpoint aimed at the spectator and rotate it 90 degrees. There is now a new presence of the internal spectator. The columns painted in the space are a continuation of the physical architecture. Paintings become in many ways specific to their environment in which they are displayed. The paintings 90 degree orientation related to our own entrance and the way we enter into the church in which the painting presents itself. 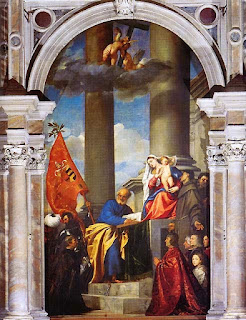 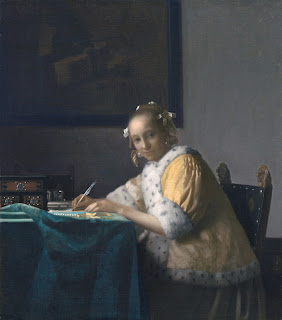