"Go away Closer" exhibition at the Hayward.


Context about Hayward Gallery: Archigram-future vision, speculative architecture. A series of concrete volumes, a sculptured landscape of windowless planes. Play between concrete as a material and its texture and that of the question "what happens inside?" The architecture constantly changes through light and texture and natural light bounces off of each building making up the landscape. The complex of which the Hayward gallery sits upon is considered "Marmite". The remodeling of the landscape and site has meant a break up of the mass, giving each site its own identification as well as still being viewed as a landscape. The interior os the Hayward is very prescribe and it is a difficult space to exhibit within. 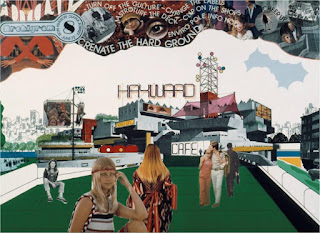 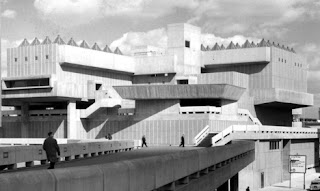 Dayanita Singh: Creates architectural structures and furniture that have embedded photographs and texts within. Photography by trade the term "photo architecture" tends to become more of a summary of her work. There is a direct relationship between image and structure - not just looking but interacting with objects. the art of book making is introduced into the work. The photographic frame in how the work is collectively presented presents new and diverse opportunities to add meaning and communicative value. Book making slowly transcribes into museum making. The production of archival units that hold and contain the artwork. 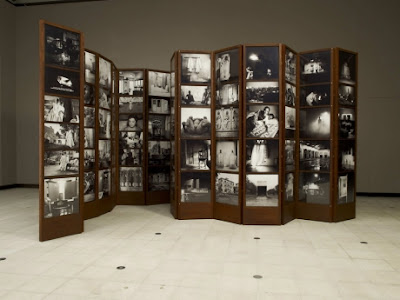 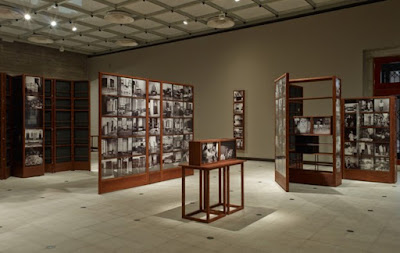 Museum of chance: Within the exhibition content is flexible and can be adapted and changed. Spaces are photographed as a context for the work but the spatial arrangement of the work question how one is presented in space and how space exists on a human scale. Certain images are presented at human scale questioning boundaries between photographic and real space. The space in the picture becomes filled by the viewer because of the relationship to the scale.

The book produced alongside the exhibition provides a fixed narrative and a physical object. The artist become fully in control in how the reader now has to read a sequence of events an images as oppose to the sometimes empty positioned frames with the presented collection.

Museum of shredding: Current exhibition on at Frith Street Gallery, the architectural structures and furniture that so often contain the archival work are now naked.  The artwork starts to blur the boundary and questions the role of the curator, director and artist in making up the gallery space.

Metonymy noun: metonymy; plural noun: metonymies
The substitution of the name of an attribute or adjunct for that of the thing meant, for example suit for business executive, or the turf for horse racing. [Not called by its own name, but rather the name of something associated with it.]