This morning I briefly discussed my interim show plans and intentions. I felt that the feedback seemed rather blunt rude at times. I spoke about the idea of a narrative and that this would develop into a drawing. I use the work drawing lightly because of the connotations of people associating it with a sheet of paper and a pen. I have considered drawing as 3-dimensionla and very much spatial. Throughout the tutorial Pete kept asking me what my role was? I seem to be the only student who is asked this question . . is it because he doesn't consider me to be a designer? am I designer? a researcher? who knows. If I am honest I don't really care, I feel that at every step of the MA I have been responding to the research sourced in both my practice and theory. Another remark that I was taken back by was when Pete referred to me as a "Gagosian groupie" as to say that my work is some form of promotional claim for the Richard Serra exhibition. It was hard to not take this personally, but to avoid any further upset and to try and resolve perhaps Pete's understanding of my project I took it upon myself to read out the introduction to my CRP. This seemed to clear up so points and Pete was considerate to this mentioned that I write well. I have had some tough tutorials recently and this seem to be another one. I almost feel like I am defending my purpose for being on the course. 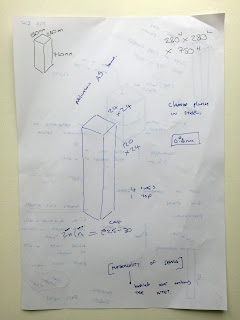 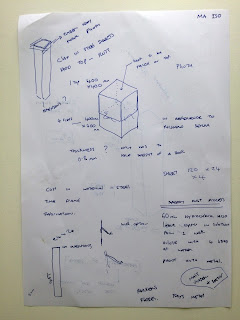 After the tutorial I went and spoke with Frank [lead technician] about my interim show ideas. Because I am going to be showing a document, I wanted to make sure that there was some considerable effort made in the presentation. I wanted to somehow create a visual connection to Serra's work that I was writing about as I am not going to mention his name within the narrative. I discussed with Frank the idea of making a steel plinth that would then rust and add mass and weight to the work juxtaposing with this light and white piece of text. We went through a series of options as Frank made it clear about the skills and workload involved in making this. He really wanted me to consider alternative options and we arrived at the option of cladding in steel a pre made MDF plinth that was no longer in use.

I was however happy to find out that a family friend of my fathers could potentially be able to fabricate a steel plinth from scratch offering my the additional opportunity to identify a scale that was unique and connected to other elements of my practice.